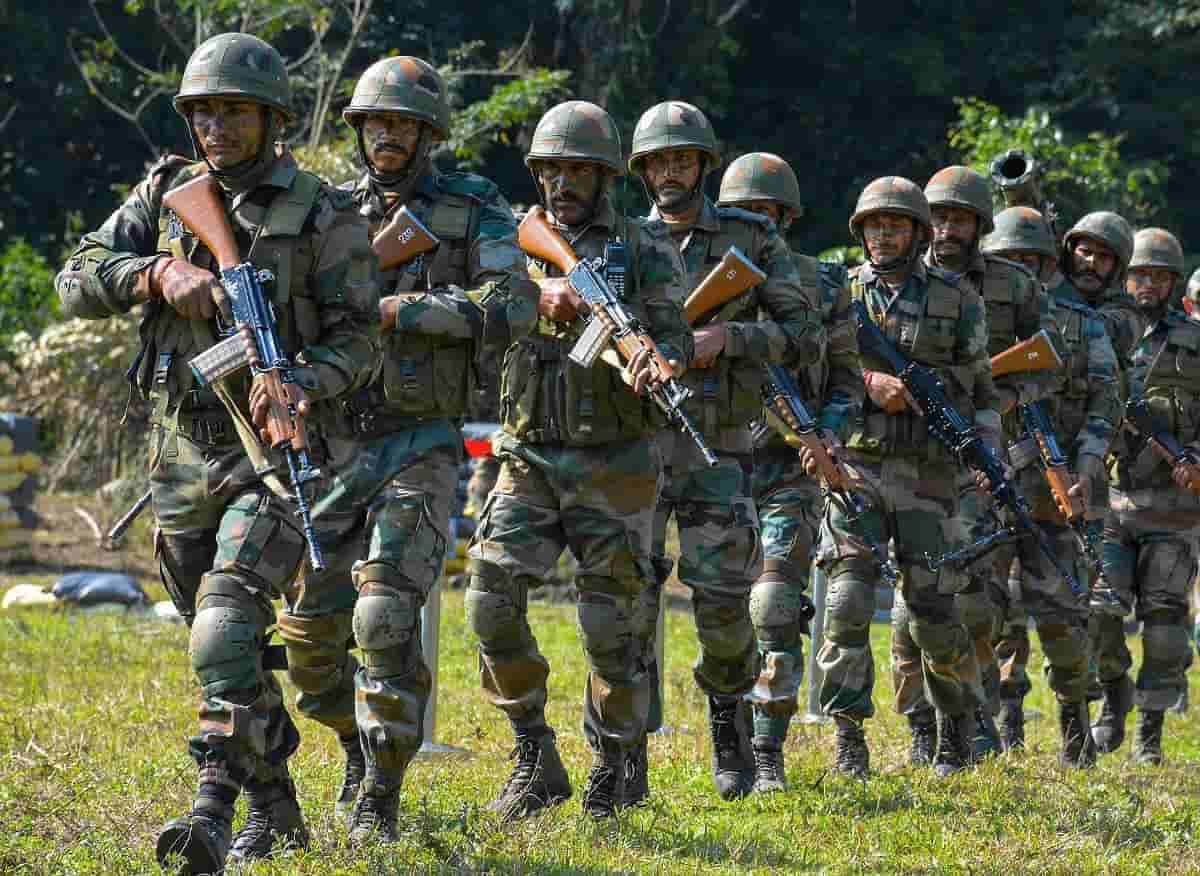 Convening of a Summary Court Martial (SCM) is by way of an exception where immediate action is necessary. Section 120 of the Army Act 1950 and the decision in Ex Havildar Ratan Singh vs Union of India & Ors and in Union of India and Others vs Vishav Priya Singh by the Hon’ble Supreme Court interpreted the question of law and settled the issue,

2  This appeal arises from a judgment of the Armed Forces Tribunal at its Chandigarh Regional Bench dated 7 December 2015. The appellant was enrolled on 29 October 1996 in the 43 Armed Brigade and was at the material time posted as Acting Lance Dafadar1. It is alleged that on 11 August 2007 while on duty for cleaning the service area in the morning, the appellant entered the residence of a colleague and while his spouse was washing her son, placed his hands on her shoulder.

3 A Summary Court Martial2 took place on 22 May 2008 during the course of which evidence was recorded. The appellant was held guilty and was dismissed from service. Among those who deposed during the SCM were the victim and her husband.

4 The Armed Forces Tribunal, while holding that the charge had been duly established, came to the conclusion that the punishment of dismissal was disproportionate and should be modified to an order of discharge.

6 On the question of law, it was urged that having due regard to the provisions of Section 120 of the Army Act 1950 and the decision of this Court in Ex Havildar Ratan Singh vs Union of India & Ors3 and in Union of India and Others vs Vishav Priya Singh4, the convening of an SCM is by way of an exception where immediate action is necessary. Hence, it was urged on behalf of the appellant that there was no reason or justification to hold an SCM in May 2008 in respect of an incident that took place in August 2007.

7 In response, Mr Sanjay Jain, the learned Additional Solicitor General submitted that on the merits of the charge of misconduct, both the victim and her spouse deposed in the course of the inquiry by the SCM. Hence, it was submitted that there is no occasion for this Court to review the pure findings of fact which have been affirmed by the Armed Forces Tribunal. Moreover, it was urged that the judgment in Vishav Priya Singh (supra) has since been clarified in the course of a review so as to be applicable on and from 5 July 2016, whereas the incident in question dates back to August 2007.

8 In the exercise of its appellate jurisdiction, this Court would be circumspect in reassessing the evidence when the Armed Forces Tribunal has duly applied its mind to the findings of fact. We have also duly assessed the submission of the appellant that in the present case, the appellant had lodged a complaint in the past against the spouse of the victim for pilferage of petrol. Be that as it may, it is not necessary for this Court to enter upon the findings of fact since there is an independent ground on which the submissions of the appellant would be worthy of acceptance.

(1) Subject to the provisions of sub- section (2), a
summary court- martial may try any offence punishable under
this Act.

(2) When there is no grave reason for immediate action
and reference can without detriment to discipline be made to
the officer empowered to convene a district court- martial or
on active service a summary general court- martial for the trial
of the alleged offender, an officer holding a summary courtmartial
shall not try without such reference any offence
punishable under any of the sections 34, 37 and 69, or any
offence against the officer holding the court.
(3) A summary court- martial may try any person subject
to this Act and under the command of the officer holding the
court, except an officer, junior commissioned officer or
warrant officer.
(4) A summary court- martial may pass any sentence
which may be passed under this Act, except a sentence ofdeath or transportation, or of imprisonment for a term
exceeding the limit specified in sub- section

(5) The limit referred to in sub- section (4) shall be one year
if the officer holding the summary court- martial is of the rank
of lieutenant colonel and upwards, and three months if such
officer is below that rank.”

10 These provisions were interpreted in the decision in Ex-Havildar Ratan
Singh (supra). Subsequently in Vishav Priya Singh (supra), a three judge Bench
of this Court, while interpreting Section 120, has observed thus:

“19. Section 116 of the Act empowers the CO of any Corps,
Department and Detachment of the regular Army to hold an
SCM and specifically states that he alone shall constitute the
Court. Sub-Section (2) then prescribes that the proceedings
shall, however, be attended through-out by two other persons
specified therein. However, such persons are not to be sworn
or affirmed. Unlike Sections 113, 115 and 114, where
composition of the Court-Martial concerned is prescribed to
consist of at least three officers, it is the CO alone who
constitutes the Court under Section 116 in respect of SCM.
Further, under Rules 39 and 40 of the Rules, CO of the
accused, or of the Corps to which the accused belongs is
specifically disqualified for serving on a GCM or DCM and
composition of a GCM ought to compose of officers of
different corps or departments. However, no such restriction
applies to SCMs and in fact the CO himself must constitute
the Court. The Act has thus given drastic power to one single
individual, namely, the CO who alone is to constitute the
Court. No doubt, this power comes with restrictions insofar as
the power to award sentence is concerned in terms of sub-
Sections (4) &(5) of Section 120. However even with such
restrictions the power is quite drastic. The reason for
conferment of such power is obvious that in order to maintain
discipline among the soldiers and units, the CO must have
certain special powers, for it is the discipline which to a great
extent binds the unit and makes it a cohesive force.
20. The High Court of Delhi was therefore completely correct
in observing that such power must be exercised rarely and
when it is absolutely imperative that immediate action is
called for. The satisfaction in that behalf must either be
articulated in writing or be available on record, specially when
the matter can be considered on merits by a tribunal, with the
coming into force of the Armed Forces Tribunals Act, 2007.”

11 In a review petition5 filed by the Union of India, the earlier judgment was
clarified on 16 February 2017 in the following terms:

“…… the requirement, as stipulated in aforesaid paragraphs
20 and 33, of recording reasons for convening Summary
Court Martial, shall apply on and with effect from the date of
the Judgment namely from 05.07.2016. Except for this
clarification, we are satisfied, that no case for review of the
judgment dated 05.07.2016 has been made out.”

12 The above clarification indicates that the requirement of recording reasons
for convening a Summary Court Martial shall apply from 5 July 2016. However,
the fundamental principle of law which has been enunciated is that the power to
order an SCM is a drastic power which must be exercised in a situation where it is
absolutely imperative that immediate action is necessary. Sub-section (2) of
Section 120 is prefaced by the words “when there is no grave reason for
immediate action”. In the present case, though the incident took place on 11
August 2007, the SCM took place on 22 May 2008. The convening of an SCM was
contrary to law.

13 Having come to this conclusion, we would have ordinarily granted liberty to
the respondents to pursue proceedings against the appellant in accordance with
law. However, nearly twelve years have elapsed since the date of the incident.
During the course of his submissions, the learned Additional Solicitor General
submitted before the Court that at this point of time, it may be difficult to find
witnesses to conclude the inquiry and hence, no useful purpose would be served
and it would not be practicable to hold the inquiry.

14 The appellant had nearly twelve years’ service when he was dismissed from service. In this view of the matter, we are of the view that the ends of justice
would be met if in the exercise of our jurisdiction under Article 142 of the
Constitution of India, we order and direct that the discharge of the appellant shall
take effect from the date on which he completes fifteen years of service so as to
render him eligible for the grant of pension. The learned counsel appearing on
behalf of the appellant has submitted that this would meet the ends of justice.

15 We accordingly allow the appeal and modify the impugned order of the
Armed Forces Tribunal in the above terms. The appellant shall stand discharged
from service on the completion of the minimum pensionable service with the result
that he would be entitled to the disbursal of his pensionary benefits in accordance
with law. The arrears of pension shall be paid over to the appellant within a period
of three months from the date of receipt of a certified copy of this order. No costs.

16 Pending application(s), if any, shall stand disposed of.

UPON hearing the counsel the Court made the following

Admit.
The appeal is allowed in terms of the signed reportable judgment.

Pending application(s), if any, shall stand disposed of.

(Signed reportable judgment is placed on the file)

Use of Military Ranks